Sovereign of the Sea

All photos by Brenda Redpath

The International Achievement In Arts Awards


"An Achievement Award!
Probably there's quite a lot out there like me wondering what is it exactly she's achieved. I've really just been living my life. In which case all of us should have one of these. Most of my life has been spent traveling around all over the world singing, playing, acting - with musicians, fellow actors, singers, technicians, backstage people and lighting and sound, producers, directors, and designers from every color and creed from all over the world and it's been great fun. I haven't noticed the time passing and I've enjoyed it immensely. I've learned an awful lot. Anyway I must say I'm still learning. Tonight on this very British stage with this wonderful applause I feel particularly British and very proud and happy to be so. I've known for some time that I've been blessed and I'm acutely aware of it tonight. I accept this with gratitude and I hope with grace." 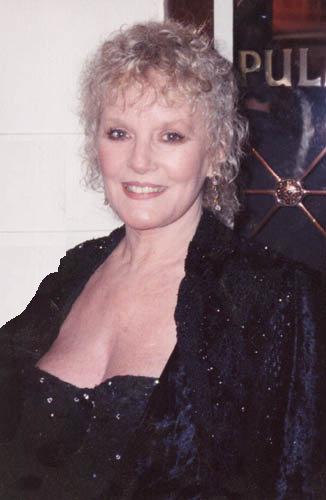 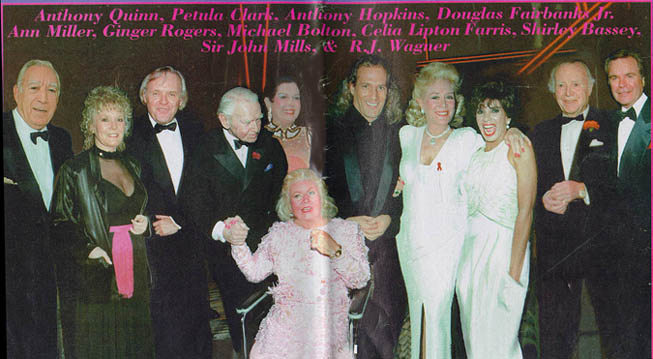 What do stars do on their night off? They shine anyway.
At least that was the case as Petula Clark, David Cassidy and the cast of Blood Brothers gave up their free Monday night to put on a musical review at Bimbo's to benefit Broadway Cares/Equity Fights AIDS. The cause was noble, the mood festive and the singing as good as it gets.
The beginning was magical. Lights dimmed, the din was hushed and Clark's inimitable voice broke the silence with an improvisation ending in the single word "Downtown." The crowd went crazy.
She then appeared atop a grand piano singing "Somewhere," by the Moody Blues. Looking at once earthy and ravishing, her voice miraculously fresh, the pop diva quickly moved on to Tony Hatch's "Don't Sleep in the Subway" and a generous set of a dozen British songs by everyone from Elton John to Andrew Lloyd Webber.
The voice was fragile at first, the phrasing sensual from the start. By the time she warmed up in "Subway," the familiar Pet sound was sweeter than memory might suggest.
Here was the voice that defined the urbane, sexier side of the '60's British Invasion. The public gave up a lot when it allowed the divorce of pop from rock and roll. France kept its Mireille Matthieu, Italy its Mina and Milva, England its Pet Clark. Barbra Streisand still nurtures the pop tradition on this side of the Atlantic. But these are the exceptions to a rule that keeps songs such as Hatch's from reaching the mass audience they once enjoyed.
"Strangers Once Again," a touching new tune from Clark's next album, hinted that the future may be brighter. The best news of all was Clark's singing itself, however. Her stage banter was winning too.
"I knew Elton long before he had hair," she quipped before launching into his " Crocodile Rock" and other hits from the '70s, "before he got married and confused millions." She continued her "bouquet from the U.K." with "Don't Cry for Me, Argentina," which made stunning use of the trademark Clark grace notes and brought a flavor all its own to the Lloyd Webber hit.
"My Love" had the audience giddy with pleasure. "Downtown" had it singing back the chorus. "All my life I have waited to play Bimbo's," joked this woman who has commanded the stage from the Copacabana to the Olympia, from Broadway to the West End. In truth, there can have been but few happier performances in her illustrious career than this intimate, exuberant concert in San Francisco Monday night.
Cassidy had a tough act to follow, but he, too, knows a thing or two about bringing a crowd to a frenzy. He captured the spirit of Bimbo's very well: Incredibly cool, totally retro, shamelessly entertaining, Cassidy put together a tribute to the late Bobby Darin that fit the place as naturally as it fit his attractive voice.
"Dream Lover" was delicious, "Up a Lazy River" even better. Composers as varied as Charles Trenet and Kurt Weil brought out the best in this singer, who would do well to record his own cover of "Mack the Knife." A crooner, a belter and a pretty sexy guy, Cassidy managed to pay homage to his idol at the same time as he reminded us of his own considerable magnetism.
The Blood Brother musicians, with particularly excellent saxophones and drums, also donated their time for the AIDS benefit along with two attractive sets of backup vocal trios from the cast: Perry Ojeda, Leslie Ann Hendricks, Mark McGrath, Marcy D. Nezza, Yvette Lawrence and Walter Hudson.
The six young singers joined the two stars for the finale, which began with Clark and Cassidy each singing one of the other's hits. Clark had a ball with "I Think I Love You," although bubble gum is clearly not her strong suit. Cassidy, for his part, really soared in "I Know a Place," which brought the pair together before a rousing finale of "Tell Me It's Not True" from Blood Brothers. The cheers at the end were long, loud and deserved.

All photos by Dave Rossi

A Tribute Concert In Memory Of Steven F. Banyai
Petula. Carole King, Helen Reddy, Broadway Cast Members Of Blood Brotheres. (Stars listed in alphabetical order.) Proceeds of concert went to the family of the doorman at the Music Box Theatre on Broadway where all three stars had played Mrs Johnstone between 1993 and 1995

AIDS charity benefit.
Petula performed I Love Paris, and One More Day [from the musical King.)

A gala concert from the Hippodrome, Golders Green, London, with the BBC Concert Orchestra, led by Martin Loveday, conducted by Kenny Clayton and Martin Yates.
Recorded for BBC Radio 2 and aired on 2 November, 1996. During the interval, Sheridan Morley chatted with Petula about her career.

PET - THE QUEEN MUM OF POP
Over the past decade the Burswood Showroom has allowed a long list of veteran artists to prove that advancing age does not necessarily mean that talent has died and retirement beckons.
In a sense there is no such thing as retirement for the genuine artist whose chosen means of expression is the very breath of life itself. Try telling the 88 year old Victor Borge the most senior artist to appear at the Burswood in recent years, that his use by date is up or that marvellous hoofer Shirley Maclaine.
This brings me to Petula Clark who has been around so long that she is not so much an entertainer as an institution rather like the Queen Mum. Her career dates back to the 1940's, where she was a child star whose popularity, so I am told led to a newspaper comic strip called Our Pet. That's quite some reputation from an early age and she?s been living up to it ever since.
Her Burswood concert revealed that the vocal cords are still in fine fettle, she moves with economical grace and her acting skills invest her show with a good deal more character insights than we usually get with singers. Petula Clark has always been in love with the theatre and it shows. Whether dropping in a monologue about the magic of theatre or chatting to the audience about meeting Fred Astaire or any other showbiz personality, Clark brings a sense of easy charm and freshness to her act.
That's the beauty of the skilled actress, of course, making the repetition of your craft seem spontaneously created just for that audience. No wonder Andrew Lloyd-Webber wanted her for the role of Norma Desmond in Sunset Boulevard. Her interpretation of Just One Look, the shows standout number, gave full measure of the anguish behind the fading movie star?s dream of a comeback to the bright lights of the studio.
Clark's performance took the audience on a journey back through her stage shows films and hit songs. She has the advantage over many veteran singers that in recent years she has managed to reinvent herself as a stage performer with long runs in Sunset ant Willy Russell's Blood Brothers. This has given her newer material to work with providing a neat counterweight to the old hits like Downtown, I Know A Place and Don't Sleep In The Subway. She also borrows freely from musicals she hasn't been in - Cats and Les Mis in particular. Her version of Memory from Cats cleansed the song of its cloying saccharine-like sentimentality, investing it with a tougher more astringent tone.
Clark admitted she had originally recorded a longer version that had not pleased her. The new version showed a singer still prepared to work at her craft to get it right.
Clark is touring Australia with her Musical Director and a keyboard player, relying on back-up musicians in each city to form her orchestra. The Perth players deserve mention for their ability to slip in behind the MD and follow the charts with impeccable musicianship. They sound as if they have been backing Clark all their lives instead of this one off occasion. And just when she was sounding so relaxed with her band, Clark decided to demonstrate another side to her versatility, - singing solo at the piano. In her early days in France (which was seen as desertion by the British, but that's another story) Clark, even met Edith Piaf who was in her declining years. She was able to witness Piaf's remarkable way with a love song and chose to interpret the very famous and tender La Vie en Rose. But Clark is clever enough not to copy slavishly; she gives us her version in whatever she does.
There was plenty of material for nostalgia buffs in her concert, but there was never a sense of a veteran pumping out routine arrangements just to keep the punters happy as they relived the songs of their youth.
This is a lady still at the top of her profession; a singer who puts demands on herself and delivers. A mature performer, certainly, but by no means a spent force.
Vive Pet.

Exquisite' was the only way to describe Petula Clark's performance at the Empire Theatre on Wednesday night. The world renowned star of Sunset Boulevard, Peter Ustiniov's 'The Card' and two time Grammy Award winner, performed with the ethereal spell binding style which made Fred Astaire, Bette Davis and Petula's personal idol Edith Piaf famous.
She may have captivated the conservative mixed Toowoomba and Brisbane audience with her talent for piano, poetry and performing, but when she described the Empire and Toowoomba as magnificent she had won their hearts. To add melody to the tune of praise, she went on to describe the theatre as being far superior to any in the United Kingdom. High praise from a songstress who has graced the boards of Broadway and the West End. It was easy to tell the star, who was coy about her 60-something years during an interview with the Chronicle before the show, became a polished and expert performer during the hey day of the 1940's show biz scene. She began her career by entertaining troops during World War II and made her big screen debut at the age of 12.
In between world renowned hits like 'Downtown', Petula dazzled the enthusiastic audience with songs from some famous and not so famous musicals.
Particularly striking was her rendition of 'Memories' from Cats and the the evocotive Charlie Chaplin penned 'This Is My Song'. Her voice remained smooth and supple throughout the 90 minute performance.

All photos by Dave Rossi